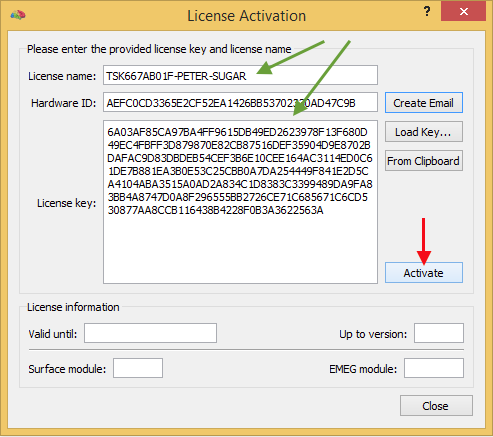 In case everything works as described, you can now use BrainVoyager as documented. A good start for beginners and advanced users is to consult the User’s Guide, which can be opened by clicking the Users Guide icon in the main toolbar or by clicking the Users Guide item in the Help menu (or use the online version).
In case that something goes wrong during activation, please check that you have an active Internet connection, which is required for activating the software. Furthermore check that both the license key and license name have been entered correctly (use copy/paste to avoid typing errors). If these tips do not help, please contact Brain Innovation for further support by sending an email to licensing [at] brainvoyager [dot] com.

The EDU version does not require any license, i.e. it can be used directly after download and installation. This fully functional version is useful to learn how BrainVoyager works but it is restricted to the analysis of provided sample data sets. In order to evaluate BrainVoyager with your own data, the EDU version might be adjusted to support your data. If you are seriously interested to purchase BrainVoyager, you can also request the trial version.

The trial version differs only in licensing and one needs to download the full version for Windows, Mac OS X and Linux. The trial version can be used to evaluate BrainVoyager with your own data since it is a fully functional program lacking only some optional components (no scripting, plugins, GPU acceleration). Note that activating and using the trial version requires access to the Internet to validate the license. The trial version expires about one month after sending the activation key.

In order to get access to the full version of BrainVoyager, a license (new or upgrade) needs to be purchased - please send an email to “sales [at] brainvoyager [dot] com” for details about getting a BrainVoyager as well as Turbo-BrainVoyager license. The full version of the software supports all features specified in the software license that is encoded in the provided license key. The license key also controls how long the program can be used (if time-limited). The full version of BrainVoyager requires Internet access during activation but contrary to the trial version, it can be used without access to the Internet, i.e. it will also work when no Internet connection is available. The full version also unlocks some features that are disabled in the trial version, including scripting, plugins and GPU acceleration.
In case that the purchase process takes longer than a few weeks, you may obtain already the full version with all licensed features but the key will expire after 1-2 months. As soon as the purchase process has been completed, the temporary key will be replaced by the final license key.

Moving a Single-Computer License to another Machine

While the provided key for a single-computer license is bound to a specific computer, you may move the license to a new machine, which will, however, require deleting the license on the “move-from” computer first and obtaining a free license for the “move-to” computer. To move a license:

Note that after deleting a license, BrainVoyager can no longer be started at the old computer (without a new licensing key)